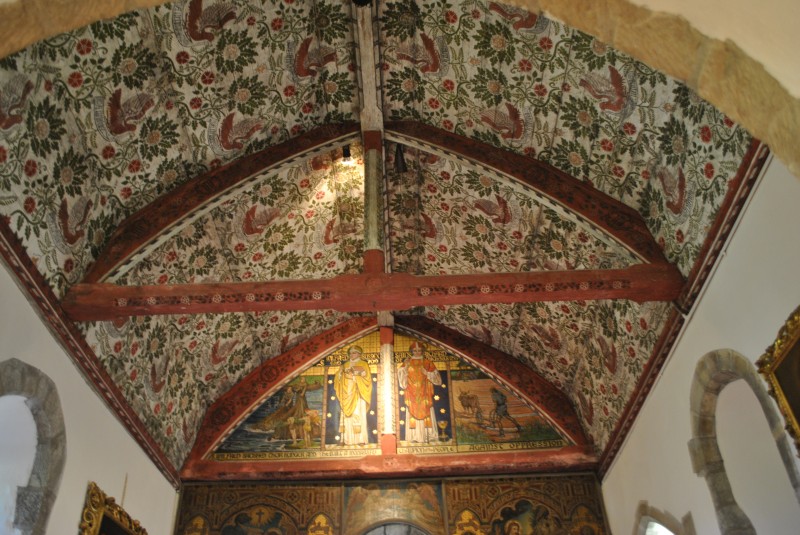 Charles Eamer Kempe (he added the ‘e’ in his thirties) was the fifth son and youngest of seven children of Nathaniel Kemp (1759-1843) of Ovingdean House. The Kemp family were a wealthy and important land-owning family around Brighton and Lewes in the late 18th century. They were descended from an old Saxon family that produced John Kemp(e) (1308?-1454) who was Lord Chancellor and Archbishop successively of York and Canterbury. As a young man Charles wanted to enter the church but thought his speech impediment would be a drawback. Instead he studied architecture and learned the techniques of stained glass. Having inherited a substantial income at 21 from his father’s will, Kempe started the ‘Kempe Studio for Stained Glass and Church Furniture’. This was a very successful venture and the studio was responsible for 3,141 windows from 1869 to 1907.

His first independent commission was the astonishing ceiling in St Wulfran’s chancel.
The restoration of this ceiling by Ruth McNeilage and team took place in October 2005.

The painted ceiling is chief among the art treasures in our church. It was designed by Charles Kempe in 1867 to commemorate his father Nathaniel Kemp, who lived in Ovingdean Hall where Charles was born in 1837, and who was churchwarden at St Wulfran’s for many years.

The decorated ceiling also celebrated the completion of a major restoration of the church in that year. Although the church dates from the 11th century and is listed grade 1, little is known of its history until the 19th century, when two major restoration projects were carried out, the first at the beginning of the century and the second in the 1860s during the rectorship of the Revd Alfred Stead (1844-89). Substantial structural repairs were carried out at this time to the outside of the building, and inside the old box pews were replaced by the present-day pews, sash windows were removed and replaced with windows more in keeping with the medieval style, and the tower area re-opened to provide additional seating.

Charles Kempe’s decoration is painted directly on to the wooden barrel-vaulted ceiling. It consists of trailing floral designs of leaves and flowers, interspersed at regular intervals with a dove holding a scroll, inscribed with the word “alleluia”.

Kempe also designed a number of stained glass windows in the church, as well as the carved wooden reredos and rood.

Charles Kempe was heavily influenced by the Arts and Crafts movement and by the work of his contemporaries William Morris and Edward Burne-Jones, in harking back to a romantic medievalism in his designs. Their ideals had much in common with those of the Anglo-Catholic movement developing within the Church of England at that time, and his work is of considerable significance in the development of Victorian church art and decoration.

He commenced in business on his own account in 1866, and it is probable that his work for St Wulfran’s was his first commission. He eventually became one of the most sought-after and successful designers of stained-glass windows and church furnishings of his day. At the height of his success, towards the end of his life, he was commissioned to produce a window of St George for Buckingham Palace.

Kempe died in 1907 and was buried in the family vault in St Wulfran’s churchyard.